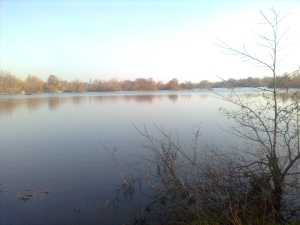 Me? I wouldn’t have thought so, but today my grandson and I took a longer ride to school going along the cycle path between the lakes rather than our usual back road route. It added a quarter mile and five minutes to our ride, but what a difference!
I took in the blue of the sky (I was free to look instead of anxiously watching traffic for two). On one side an immensity of green enclosed the wood land on the other the lake lay cool and calm as if drawing my heart out of dusty confinement.
My grandson’s usual grumbles that he was “too tired, hadn’t slept well, etc.” transformed into calls of “Gran look at that duck all curled in a ball” or “oooh what a cutie!” as a myriad of dogs sauntered by happily enjoying an early morning stroll. People smiled and said hello instead of frowning.
We flew along unhampered by cars and pavements. My grandson becoming a boy again (rather than the obsessive I-pad player that took a stiff talk to get him to stop and eat breakfast.). Being out in nature had transformed his morning, but was it just him? Wasn’t I transformed also, how patient had I been focused solely on the all important school whistle?
What had it cost me? Not energy, the extra quarter mile was more than made up for by the lack of stress and the sky and water had fed my spirit with the stuff of dreams. It cost only five minutes, a terrific bargain! How many days last year had I nagged and cajoled to get him to school when the answer was there all the time and it only cost five minutes. I wonder how many other aspects of my life could be enriched by a few more five minute investments?

4 thoughts on “Am I Time Obsessed?”