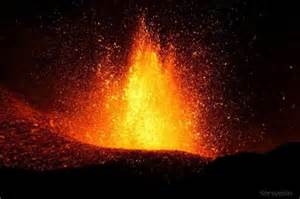 When earth can endure no more they burst forth, erupting into the air in a blaze of sulfuric passion. Forces confined neath solid depths breach the bedrock of the status quo bursting forth in a wave of destructive fury. Forces of nature, long years held in check, shift rock and stone to explode forth in fury, fire kindling nature as tree and bush ignite in a blaze of ferocity. Scarlet flags wave on the air as voices rise in crescendo. Earth cracks as minions from inferior levels blaze forth in their upward flow to pinnacles of power. They cannot be confined forever, see them blaze down the slope of freedom a lashing tongue of flame to all that withstand them.
At last the torrent is silent, the earth stills, air cools. Life can begin again. Steam rises from blackened ground as forces, once fluid, solidify becoming the new “upper crust”, after a while fertile slopes spring forth in life, innovative ideas, new minds, new investment. Homes are rebuilt, land resettled and allocated. Cows graze in peace where once lava flowed, but beneath the soil forces of buried resistance develop, pressure builds.