A great lesson in this quote!

A great lesson in this quote! 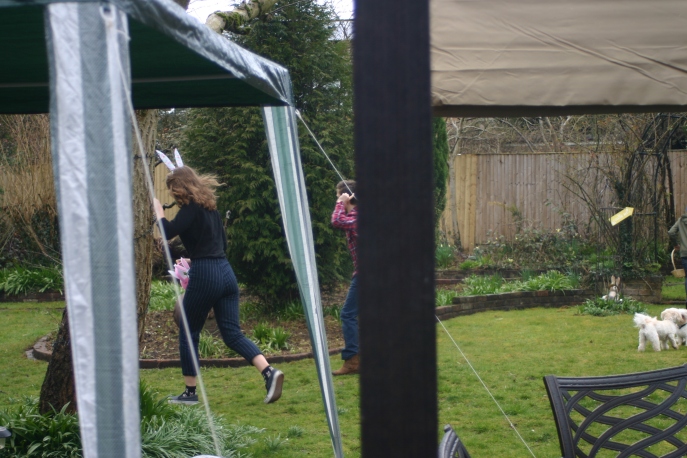 Despite a deluge of English weather (rain, cloud sun, rain, cloud sun  etc.) we had a wonderful Easter party – though the petting zoo was somewhat neglected after the boys discovered my grandson’s nerf gun collection during one of the outbursts of rain.lol! Hope your Easter was equally enjoyable.

It was dark, it was damp, and cold. Nothing could be heard except a drop of water dripping from somewhere, once every few seconds. Was He dead really? Yes a number of people had handled His body, and they did not see Him breathing. His skin was cold, blue, and as hard as a rock. Wounds no longer bled.

But at some point, here in this cave, the earth began to shake, and somehow there was a light that pierced the thick walls of the cave. Heaven opened and broke down the doors of death, while angels sang. The intensity of the light was so bright nothing else could be seen, but the great work of restoration began.

His skin began to soften and what was left of his heart and lungs was made whole. A heartbeat, His first in days, shook the ground like thunder…

“Come to me, all you who are weary and burdened, and I will give you rest. Take my yoke upon you and learn from me, for I am gentle and humble in heart, and you will find rest for your souls. For my yoke is easy and my burden is light.” ~Matthew 11:28-30 ✝ **Images […]

via Come to me… — Sacred Touches

I have to say that so far this has been the most awesome Easter Day ever, for me it feels like a day of total redemption. This coming Tuesday I will be celebrating 4 years sober, which in its self is a massive achievement, that I am both proud of and thankful for the strength […]

via My Awesome Day — The Bottom of a Bottle

May your life also break forth in joy, life and power as Easter Sunday dawns and spring comes at last.

Eggs, bunnies and get togethers are nice, I like them all (and will be partaking of them today) but the power and joy of the resurrection, the ultimate victory, is so much more!

I haven’t been to the cinema in years but my curiosity to see this one enticed me to make the effort (I much prefer to watch movies at home). I’m so glad I did. I have to give this one 5 stars (despite the  expected groans of the critics).

“God dwells in life. He dwells more in one little sparrow than he does in all the buildings and monuments supposedly dedicated to him”