I realised in early adolescence I was not to be one of those beautiful types with delicate bones, perfect features and bushels of shining curls. While I looked reasonably OK, my too round face and slightly saggy chin ruled out any such notions.
My self-perception, regarding looks, later became very confused. I was told often I was beautiful, but photos always brought me back to reality. Mirrors were the most confusing of all, a casual glance might depict me as surprisingly beautiful or jarringly ugly. It’s only in my latter years I’ve come to understand. You see it’s Jesus coming through, lighting up my plain face that transforms it – beauty of a different kind.
If I was naturally beautiful it wouldn’t be so noticeable. What is so nice about “my realisation” is it means anyone can be beautiful regardless of their actual physical appearance. How many times have you seen a plain (even ugly) person transform into beauty when they fall in love? I’ve seen it often, love itself, being a part of God, transforms. Not only that but this kind of beauty doesn’t fade, has no need of creams and face lifts (in fact these things tend to reduce it). If anything, it grows more apparent with age. So, if like me you don’t rate high on the physical looks scale, remember God’s love makes us all beautiful!
I chose this recent photo from my daughter’s 40th birthday party as somewhat of an example. My kids got so many compliments of how young and beautiful their mother was, some even commented directly. It all depends on how you look at the photo you see, the round face and “turtle effect” saggy chin are there, but I think the photo also caught something else. The couple I was talking to were wonderful people who I thoroughly enjoyed conversing with (as were many at the event). Forgetting my less than perfect self among such a glittering assortment of good looks I was fully engaged in conversation with them. 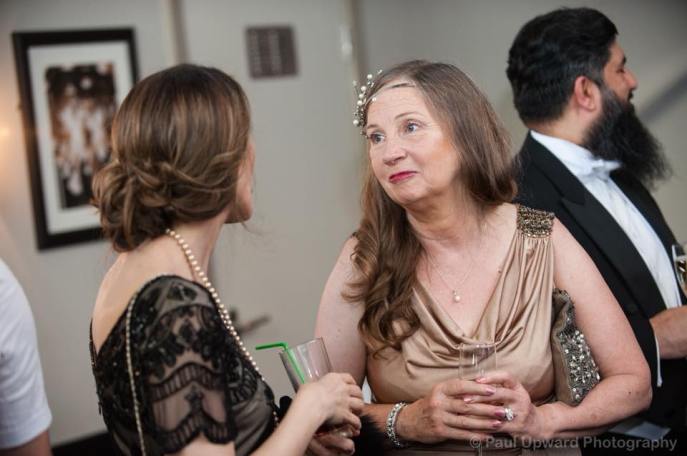 Noticing the same effect in others, when happily relaxed with friends, or simply in love, I’ve termed a phrase, “their light’s come on”. Even more wonderful we can turn on other’s lights by sharing love, especially God’s love. Though I’d have liked to be beautiful I’m thankful God made me the way I am so I could understand this. There are no “ugly” or “plain” people in God’s eyes, because He loves us all. He even chose that kind of body for Himself – “there is no beauty that we should desire him” (Isiah 53:2).

Not all miracles are health related or even critical situations, sometimes God does things just to spoil us. It was that way with my first trip into China way back before the doors began to open. I had a fascination for China since at five years old I discovered it was on the other side of the globe and dug up my dad’s rose bed trying to dig there lol!

Some 40 years ago, having lived some years in Hong Kong (then a British colony) it was my dream to visit China. The situation was impossible as visas were given only by special invitation or to H K Chinese with relatives in China. I’d been praying for some time for a way when a Chinese friend told me he had relatives still in China. He took me to the China Travel Agency in Kowloon and pretended I was his sister in law.

To get some idea of this office imagine a run on the stock exchange, yelling, jostling, confusion. For him to get a visa stamp on my passport could be explained by this hubbub. The miracle was when he also submitted my husband’s British passport and obtained a visa on it too. Chinese are sharp and no matter the confusion would definitely get that with a British husband I couldn’t be his sister in law, but just, stamp, stamp and there it was the dream come true!

When we entered China, the officials couldn’t believe our visa, or figure how we could have gotten it lol! We were celebrities! Most mainland Chinese had never seen a foreigner before and definitely not our three blond, blue eyed children. If we stopped in the street we’d instantly be surrounded by a huge crowd and well-meaning people would just pick up one of the kids and run off with them to show their neighbours. My husband, who spoke more Cantonese, would be forever chasing after them. Then suddenly the crowd would melt away and we’d be left with one man – the government representative. It happened every time, so it was difficult to talk with anyone. They were always very concerned that we had three children when the old one child policy was in effect, asking how or earth we coped etc. Sadly, we only had funds for a short stay, but it showed me with God all things are possible and even the “bamboo curtain” was nothing to Him. A few years later the doors began to open and I, along with many others, got to spend four wonderful years there, the complete fulfilment of my childhood dream.

Sorry my blog and reader have been very neglected of late. Since this is majorly due to family reunions, parties, picnics, etc. etc. I wont apologise too much lol! Hope you are all also enjoying the spring and all its joys.

(The photo is me enjoying 20s style dress up at my daughter’s 40 birthday party – the climax of recent events. )

Sometimes God brings someone close to your heart just before they go through something. It was that way with my Chinese son in law’s big sister. I met her when she came for a visit a few months before I left China. A saint with a sense of humour, I instantly liked and grew fond of her, as did we all. Just a few weeks after her return to the US we got the news she had been diagnosed with bone cancer. We were all devistated.

A new Christian, she asked for prayer before going for her first course of treatment. We all prayed up a storm, it seemed so wrong, someone who had always been there for others, a single mum with a ten year old son, one of the kindest people one could ever meet. Why her?

Then wonderful news came, after a few preliminary tests the doctors couldn’t explain it. There was no sign whatsoever of bone cancer. It was just gone!

Funny though it may be, the picture gives a pretty acurate illustration of spring in England – this year being a pretty extreme case!

While chuckling, I thought life can be like that too. After a long “winter” the sun finally appears only to be eclisped a few days later by a torrential downpour of problems and sorrows. Slowly it picks up again, the clouds of doubt disperse as it grows steadily warmer. Then again the cold hits etc.

My son, with the manifest wisdom of a thirteen year old, once told me when I felt overloaded with problems. “It’s like the tide, the waves come in and then withdraw but each time they reach a little further and after a while though you don’t see it so much the tide is in.”

Spring here is like that too, each time it gets cold again it’s a little warmer than last time, each time the sun shines it lasts longer. Life is like that too. Seldom do we advance steadily toward our dreams. It’s more often two steps forward and one back. It’s important to bare this in mind and keep our minds on the progress or we can get discouraged by frequent set backs and throw in the towel just before it’s time to launch into the depths and swim.