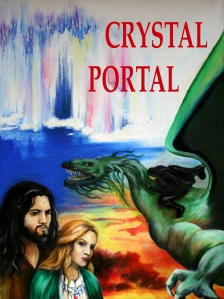 (1st chapter peek at my as yet unpublished book)

Trees hung in festooned splendor, the air thick with the heady smell of earth. A mouse scurried through the undergrowth. Nature ran wild. It was an ancient and forbidden place. Ash crouched down examining, his eye taking in every sign.There they were again, this time more defined, imprints of a foot, small, feminine? …definitely feminine. The light was dimming, soon the dogs would come. Best get after them.
“But a woman, here in the forest? It had always been men, always!”
Resolute, he shouldered his bow “better an arrow,” he told himself. “Better an arrow than the dogs!” He had seen what the dogs could do, razored teeth and claws slashing, tearing… bred for the task… they could… His belly churned at the memory. No, an arrow was a better way to go. He always told himself so, but for all that he had no stomach for this quarry.
He stalked panther like, through the trees deep set eyes seeking his prey. The tracks were fresh, she couldn’t be far, if “she” it was. He became aware of a slight rustling up ahead, a glimpse of white among the trees.
“It was a woman, and a young one at that.”
Fitting a silent arrow he crept forward. Trees and bracken obscured the shot. He wanted to make this clean, painless if possible.
“No hurry,” he told himself, “she could not out run him. In all his years as a tracker he had never lost a quarry.” He crept closer.
“She’s staggering,” he thought, “near exhaustion.” For a moment pity touched his heart; then it hardened again. “Why did they keep coming? What was it that drew them on?”
He could see her no more. Suspecting a trap of some sort he edged forward. There was no trap. She lay a breathless, crumpled heap, tangled locks strewn beside her, limp arms protruding from ruffled fabric, face tense and pale, yet she was beautiful… Exhausted eyes opened in horror and a stifled scream caught upon her lips.
He stood frozen, eye meeting eye. She did not, could not, move.
“Why didn’t she run? Running made it easier!” She lay looking at him her gaze wide and fearful. How could he kill her, how…?
“Better than the dogs. Better that than the dogs,” he told himself. Bracing he raised the bow, pulled back the string… the eyes closed.

“Why doesn’t he fire?” She just wanted it to end… Seconds turned to minutes, dragging past like lifetimes…
Rough hands seized her. She waited for the stab of a dagger, a grip at her throat, but there was neither, just the swift patter of doeskin boots on the leaves. Opening her eyes she saw the masked helmet of the trackers, harsh engraved patterns like a beast of prey leading up to horned crests. Half man, half beast, so they said. She had heard stories of the trackers, of what they did to Urkisht women! She struggled finding her voice only to be drowned by a giant hand stifling her breath, arms like bands of steel around her. Her wits shattered by fear and exhaustion she passed into oblivion…
*
The cold eddy of water revived her senses. She kept still biding her time; she must catch him off guard. He was wading across a stretch of water toward an island of some kind. The sun was low in the sky but not yet set, they couldn’t have come far. The padding had given way to a peaceful swishing sound that belied the terror of her situation. Even if she might get free how could she escape? This was his territory, not hers. He was a tracker and soon the dogs would come! She had spent the last two nights sleeping far above the forest floor but tonight she had no strength to climb…
Gaining the bank he set her down motioning her to be quiet. Reaching up he pulled off the helm that obscured his features shaking out a mane of thick, black hair that curled down past his shoulders. Green flecked eyes met her own, augmented by strong regular features and a mouth that slowly creased to a smile as if somehow it had forgotten such things and now remembered. This was no monster!

“What is your name?” The resonate voice broke the silence.
“Ellese…”
“Why did you come here?”
“I seek the portal. The voices told me I would find it here.”
“It is forbidden!” The voice was stern, commanding. “You must go back, I will take you to the forest’s edge then you must return home. Tell no one! Do you understand! To stay here is death! The dogs will find you and tear you to pieces – don’t you understand!?”
“I know for I have seen it, but I must go.”
“Why? Why would you die?”
“To save my people, but I do not believe I will die.”
“None of them did! But they are all dead. No one has ever made it through the forest alive.”
Ellese stopped for a moment. “Why didn’t you kill me? You had the chance, but instead you brought me here.”
“I couldn’t bear the dogs to get you. They…”
“But you could have killed me. Have you killed others?”
“Better that, than the dogs!” Ash’s defence system kicked in.
She’d seen visions of the dogs, unnatural beasts, elongated fangs protruding from grotesquely dappled mouths, eyes red and all devouring, like no dog she had ever seen. A shudder shook her body.
“Yes, better than the dogs,” she said, “but why did you not kill me?”
“I … I couldn’t. You were too … I don’t know… perhaps the look in your eyes. I never looked in their eyes, they just ran.”
She remembered the voices, “don’t run… they’ll shoot you.” She looked up into the clear jade speckled eyes. “Thank you. I could not have gone on; I had no strength left to climb. I have not eaten in days”.
A look of concern passed over Ash’s face. He paused a moment.
“Wait. Wait here,” he said. “Look for dry wood and I shall bring food. I’ll not be long. Don’t leave the island. The dogs don’t come to this place, they hate the water!” With that he strode off back through the river his bow strung across his back.
Ellese watched him go, the soft swish the only sound in the stillness. She was alone, alone and safe, for the time being at least. He wouldn’t harm her it seemed, but what could she do? She couldn’t go back…
Perhaps he would help her? Help her! What was she thinking? He was a tracker, a tracker with a conscience perhaps, but a tracker none the less. Tomorrow he would escort her out of the forest. He might save her life but he would not aid her.
“He is a tracker! A tracker!” she repeated to herself, but somehow the knowledge could not erase the feeling of that silent gaze. There was something more to him… She picked up a branch then discarded it… too wet. Seizing another she began to rapidly gather the needed wood. Her strength, having recovered somewhat, would not last.

(I’ve now put all my posts of this together to make it easy to read for anyone that’s interested. All comments and suggestions welcome.)