While trying to find an unflooded way to my allotment after heavy rain this sight burst upon me. Of course my mobile’s camera doesn’t catch its brilliance, (picture a brilliant red). There it was right in my path (the only semi dry one) a bright splash of colour amidst somewhat deary greens and browns.

Life is like that too sometimes, the path can seem flooded with problems. You have to keep trying different ways, each equally dreary. then suddenly, from nowhere, a bright splash of colour hits you, bringing vibrant hues of joy and passion your way! 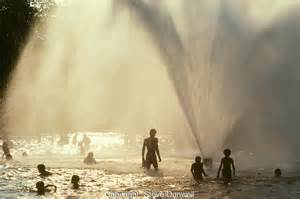 A life filled with God’s spirit is like a fountain. It may turn and twist, swirl and flow, breaking forth sometimes in leaping cascades when channeled through a narrow place.

If your life has been through “narrow pipes” recently maybe it is so you can burst forth in leaping heights and shower many with your cool blessings,

Even constraints have their uses. The restricted flow and pressure forces them upward to burst forth in splendor!

(“Out of their belly shall flow living fountains!”)

A difficult time in your life?

When you see an adventure in a movie it looks exciting, like fun, but in real life it’s not quite the same. Your stomach doesn’t just churn it grips like a fist and twists. Feeling you’re about to fall apart at any moment you have to hold things together, hold yourself together in order to survive. Later folks may oh and ah at the story but at the time it isn’t like that. It’s just plain scary.

I experienced this during my break up with my first husband. Handsome, romantic and from a rich and influential S E Asian family he swept me off my feet but intercontinental marriages are not for the faint hearted. It wasn’t a matter of he didn’t love me, rather he loved too much but in the wrong way. Our passion became destructive to where, despite my total faithfulness; he was so paranoid that I might fall for someone else that life became unliveable. I didn’t even dare talk with other men for fear of his beating them up. It was totally out of control, reasoning and counselling didn’t help. I knew I was pregnant again and that I needed to escape while there was time if I wanted to keep possession of my children.

The details of that 007 style escape are too long to recall here, but if I tell you they included bursting through armed guards to plead with a general to take me and my daughter on his private plane to escape to the embassy you’ll get some idea.

The British embassy said they couldn’t help me without possibly causing an “incident” (his father had helped finance the leader in power and his brother was in the government) but they put me in touch with a local charity that could hide me and help me get out of the country. This was followed by a couple of weeks of staying  in an orphanage in the boonies, hidden away from windows etc. The conditions were pretty primitive but they were good people. Finally, shaking inside, I was driven to the airport. As I handed over my passport I was stopped. My heart thudded in my chest (my secret fear was that his family had given my details to immigrations to prevent my leaving). Thankfully there was just some obscure tax I hadn’t paid and I was able to board a plane next day.

My parents met me at Heathrow airport horrified at how thin I was. At seven months pregnant I weighed less than my normal weight (stress). For the next two weeks I ate and slept and slept and ate. Wonderfully in spite of all this my new baby girl was born small, but perfect, growing up to be beautiful, smart and best of all a wonderful, good-hearted woman. To have her made the whole experience worth it. We escaped “without even the smell of smoke!”

Be wiser than me take care who you marry!