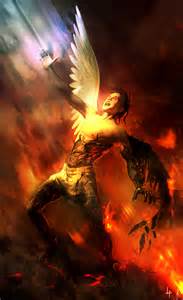 Whether you consider him mythical, symbolic or an actual entity, with Halloween approaching in all its lurid costumes it’s surprising how few folks know his origins.
The story is told in the Bible that Satan was once God’s top man, (or angel) the light bearer, powerful and beautiful beyond imagination. His body embellished with music he led the praise of God. So what happened? Basically it seems it wasn’t enough for Satan being the supreme angel. In his pride he wanted to be God, to be worshiped, therefore he rebelled persuading a third of the angels to join him.
He’s described as “the Prince of the Air” and “the father of lies.” The most common caricature of Satan is a little guy with horns and a tail but I would probably depict him as a handsome, impeccably dressed, intellectual, smooth tongued and alluring, only the eyes giving him away as evil. Genesis has him pictured as a snake persuading Eve with subtle words to doubt God（His Bible knowledge is reputed to be better than most Christians and he tries to use it against them as he did Jesus.)
Halloween costumes are often sexy, but again there in a subtle lie here. Sex was God’s creation instigated before “the fall of man”, it’s sexual perversion that is Satan’s domain. He cannot create only pervert. He’s also referred to as “the god of this world”. In spite of God’s overall sovereignty he is said to have power in this realm giving the “kingdoms of this world” to who he may. (God gave dominion to man and through man’s choices Satan took control to a large extent.) This is an interesting viewpoint depicting Christians as God’s 5th columnists working to bring down Satan’s power explaining why evil runs rampant in the earth unless restrained by good.
Another little known Genesis Bible history is that the angels who followed Satan had sex with the women of the earth and that their children were giants of a vicious and diabolical nature. This could explain a frequent question of why in ancient history God asked his people to slaughter whole populations even women and children (lest the DNA be further corrupted). There are some interesting books on this due in part to the many assertions, photos etc. of giant human skeletons being unearthed. It’s not my intention to get into that here as I’m not at all sure about these assertions but it’s an interesting read.
Whatever you believe I hope this has given some new background to your Halloween celebrations. Personally I shall breathe a sigh of relief when it’s over and I can look forward to Christmas when we celebrate the forces of good.